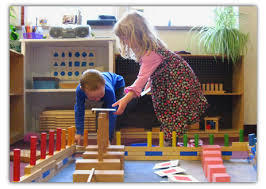 In the years around 1900, Dr. Maria Montessori worked with preschool and elementary school age students with disabilities and created a method of teaching and learning that would later become called the Montessori Method.

Who was Dr. Maria Montessori?

Philosophy of a Montessori Education

Maria Montessori believed that children were different from adults and that children learned best when they were provided with safe and natural environments in which to play. The role of the adults was to keep the environment safe and to keep changing the environment to allow the child to work to his her greatest potential. By learning independently, students educated in Montessori schools gain self confidence and often learn to correct their own mistakes without the help of their teachers.

The Montessori classroom has 6 curriculum areas including:

• Practical Life: students learn how to take care of themselves and their environment by learning to dress themselves, clean up after themselves and by taking care of plants and animals, among other things.

• Science: science is emphasized heavily in Montessori classrooms. Students can often be seen doing a science experiment to learn a concept.

• Language: preschool students learn the alphabet through hands on activities such as tracing letters and forming words with movable letters.
• Math: math is taught through the use of manipulatives, games and other fun supplies.

Montessori elementary school group students within a three year age range together in a single classroom. This is designed to create an interactive environment and to allow older students to demonstrate what they have learned and to act as teachers for the younger students.

While the Montessori approach to learning is most often discussed with regard to the preschool and elementary school years, Dr. Montessori also had thoughts about how middle and high school students could learn effectively. Dr. Montessori believed that adolescence was a very difficult time for people to be able to learn within the traditional school models.

Instead, Montessori advocated for a break from formal academics. She believed that students of this age could learn best by being close to nature. She advocated for high schools that were set up to be working farms. Students would be responsible for the planning, growing, cultivating, harvesting and distribution of all of the farm produce as well as the transportation, economic and other considerations associated with running a business. She suggested offering several varied courses that students could pursue if they were interested but without pressure.

The Montessori Method provides many benefits to students of between the ages of 3 and 18. Students are encouraged to discover things on their own and to perform experiments under the silent but watchful eye of their teacher.

While Maria Montessori was likely pleased with the success of her Casa dei Bambini experiment, she is unlikely to have known how influential that experiment would become and how popular the Montessori Method would be worldwide over a century later.